Like A Chameleon, Can this Technology Really Allow Veterans To Gradually Grow Back Fingers & Toes?

Like A Chameleon, Can this Technology Really Allow Veterans To Gradually Grow Back Fingers & Toes? 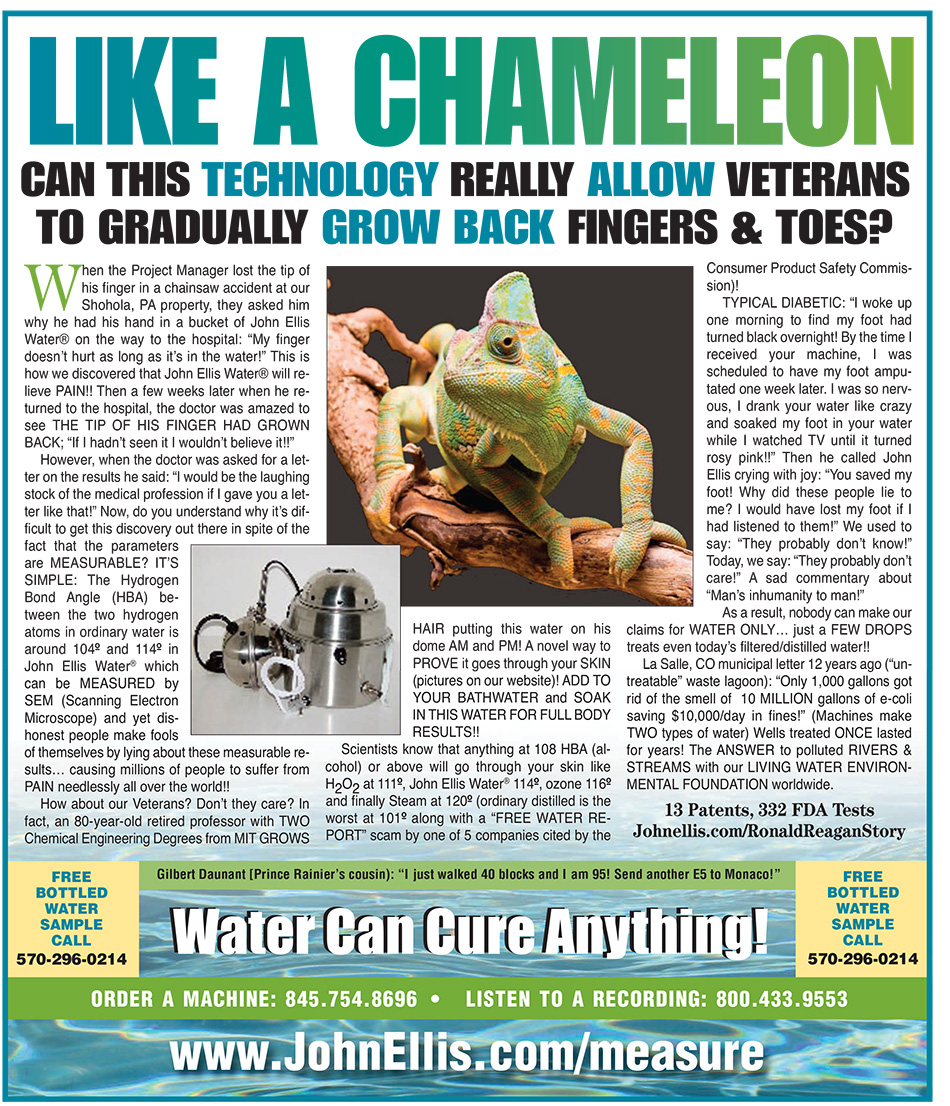 When the Project Manager lost the tip of his finger in a chainsaw accident at our Shohola, PA property, they asked him why he had his hand in a bucket of John Ellis Water® on the way to the hospital: “My finger doesn’t hurt as long as it’s in the water!” This is how we discovered that John Ellis Water® will relieve PAIN!! Then a few weeks later when he re-turned to the hospital, the doctor was amazed to see THE TIP OF HIS FINGER HAD GROWN BACK; “If I hadn’t seen it I wouldn’t believe it!!” However, when the doctor was asked for a let-
ter on the results he said: “I would be the laughing stock of the medical profession if I gave you a letter like that!” Now, do you understand why it’s difficult to get this discovery out there in spite of the fact that the parameters are MEASURABLE? IT’S SIMPLE:

The Hydrogen Bond Angle (HBA) between the two hydrogen atoms in ordinary water is around 104º and 114º in John Ellis Water ® which can be MEASURED by SEM (Scanning Electron Microscope) and yet dis-honest people make fools of themselves by lying about these measurable results… causing millions of people to suffer from PAIN needlessly all over the world!!

How about our Veterans? Don’t they care? In fact, an 80-year-old retired professor with TWO Chemical Engineering Degrees from MIT GROWS HAIR putting this water on his dome AM and PM! A novel way to PROVE it goes through your SKIN (pictures on our website)! ADD TO YOUR BATHWATER and SOAK IN THIS WATER FOR FULL BODY RESULTS!!
Scientists know that anything at 108 HBA (al- cohol) or above will go through your skin like H2O2 at 111º, John Ellis Water ® 114º, ozone 116º and finally Steam at 120º (ordinary distilled is the worst at 101º along with a “FREE WATER REPORT” scam by one of 5 companies cited by the Consumer Product Safety Commission)!

TYPICAL DIABETIC: “I woke up one morning to find my foot had turned black overnight! By the time I received your machine, I was scheduled to have my foot amputated one week later. I was so nervous, I drank your water like crazy and soaked my foot in your water while I watched TV until it turned rosy pink!!” Then he called John Ellis crying with joy: “You saved my
foot! Why did these people lie to me? I would have lost my foot if I had listened to them!” We used to say: “They probably don’t know!” Today, we say: “They probably don’t care!” A sad commentary about “Man’s inhumanity to man!”  As a result, nobody can make our claims for WATER ONLY… just a FEW DROPS treats even today’s filtered/distilled water!! La Salle, CO municipal letter 12 years ago (“un- treatable” waste lagoon): “Only 1,000 gallons got rid of the smell of 10 MILLION gallons of e-coli saving $10,000/day in fines!” (Machines make
TWO types of water) Wells treated ONCE lasted for years! The ANSWER to polluted RIVERS & STREAMS with our LIVING WATER ENVIRONMENTAL FOUNDATION worldwide.
13 Patents, 332 FDA Tests